In architecture, as in ecology, equilibrium between inside and outside is rather like paradise, something too good to be true, therefore not good enough.
David Leatherbarrow

Is architecture a cult of the externalised object? Only four of 46 images of prize winning entries on the 2009 World Architecture Festival website show interiors. This object-cult and neglect of the interior is symptomatic of architecture’s domination by a polarised nineteenth-century conception of containment. So efficiently are interior and exterior sealed off from each other that they are frequently treated as discrete professional domains.

However, inside and outside are always ready to be reversed – their boundaries full of tension and at points occupied by beings who awaken “two-way dreams” (Bachelard). In Benjamin’s Arcades Project, 19th century petit bourgeois encased themselves in their interior as in a “spider’s web, in whose toils world events hang loosely suspended like so many insect bodies sucked dry”. In his dissection of their culture, where the private sphere of the dwelling and public spheres of work and politics are opposites, the interior appears as a counterpart to the global consciousness of empire. European traders and travellers retreated after their worldly adventures into their wallpapered interiors, to “save their souls” (Sloterdijk). However, the sealed world of the 1851 Crystal Palace turned the exterior world into a magic form of immanence – by asserting the values of imperialist capitalism in a spectacular domestication of the globe. Conversely, the Parisian arcades appear as the workers’ living rooms while the apartments of the new boulevards lose the vertical emphasis of old city dwellings and form instead a horizontal march of salons that parallel the thoroughfares, which end at train stations whose networks, in turn, run to the limits of national territory and beckoning colonial horizons beyond.

Today’s spaces can seem more involuted, fragile and unsettled. Phenomenological theories focus on the proximate qualities of architecture and a possible avenue for a new emphasis on the interior. Other approaches highlight different modes of proximity like digital, intimate involvements. The ability to say “we” may be a fundamental condition of space, which creates interior spaces as spheres for dwelling (Sloterdijk). Like immersive plants, they elaborate human existence and embed human relationships. Opposite forces create the climatised hothouses of luxury consumption, relaxation and privileged cosmopolitanism familiar to us today, in which nature and culture are indoor affairs and history and the Other are left outside. Those with purchasing power stage their daydreams on the inside as, on the outside, more or less forgotten majorities try to survive amongst traditions, adaptations, revolutions and improvisations.

How can interiority be conjugated in new ways? How do we draw the lines today? What constitutes interiority? What does it have to say about the institutionalised containment of refugee centres or gated communities or, indeed, the openness of the Pacific? What is it like to negotiate the pae [2] from inside? Where are the spaces of Self and Other? How do global and regional flows circulate in interiors? What does interiority mean in the context of technological forms of life and the ubiquity of cybernetic feedback loops, managerial logistics, probabilistic measures of risk and the highly scripted spaces of transport and circulation that Marc Augé has referred to as ‘non-places’? How are interior immensity and claustrophobia related, and is there a special relationship between interiority and possession? When is a set of walls an interior, when is an object a container, and when is a container a world?

Interstices: Journal of Architecture and Related Arts invites you to unsettle the dichotomy of interior and exterior; to redefine and reorient the concept of the interior for the present, and project it towards the future. [3] For the refereed part, we welcome submission of 5000 word papers and visual submissions with an accompanying text of approximately 500 words. For the non-refereed part, we welcome papers up to 2500 words and reviews of up to 1000 words.

Please send your submissions to the co-ordinating editor, Julia Gatley (julia.gatley@auckland.ac.nz), by 28 February 2011. Notes for contributors are available here.

[1] ‘Unsettled containers’ (unruhige Behälter) is a term which the German philosopher Peter Sloterdijk probably derived from Gaston Bachelard, who conceived of humans as fundamentally unsettled and half-open beings.

[3] Interstices: A Journal of Architecture and Related Arts received an “A” rating in the 2009 and 2010 Australian Research Council’s Journal Ranking Exercise. See also http://www.2020publication.info/ 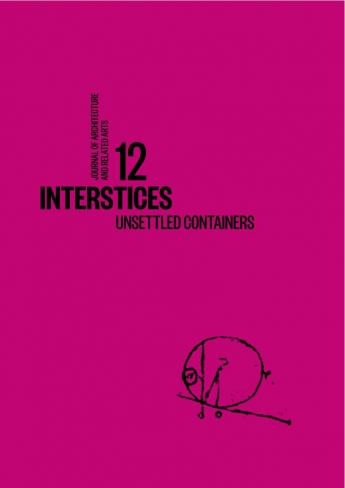