INT Issue 13: Technics, Memory and the Architecture of History CFP

Technics, Memory and the Architecture of History

In the light of massive catastrophes – the earthquakes near Sendai and Christchurch, the tsunamis of Acheh and Katrina’s devastation of New Orleans – the question of urban and architectural reconstruction invokes the question of remembering. What is this ‘past’ that we remember and on which we base our future reconstructions? What images of the past do we call upon in our decisions to build or not to build – and how do they negotiate the terrain between memory and history, nature and culture, technology and sustainability, planning and responding, tradition and innovation, foundations and interstices?

To Bernard Stiegler, the image that we recall in/as history is not an “image in general”. Rather it is an image with an irreducible materiality, inscribed in a technical history. That is to say, the image-object of history is given to us; we inherit it and make it our own. History has therefore a technicity and its own historicity: the architecture of its images contains technical traces of their construction.

The task of the historian becomes more complex in the light of such mnemotechnics. In recalling the past, no transcendental signified or image precedes the image-object. The event of memory calls for an imagination that does not separate mental images from image-objects and their associated technics of construction and dissemination.

As Lebbeus Woods says, the inventions and radical reconstructions that make survival possible under extreme, catastrophic conditions provide new ways of living in a paradoxical state of perpetual destruction and construction. Here, the image-object of the past maintains a dynamics of simultaneous political, technological, epistemological and personal change. The practices of architecture, design and art – when treated as images with technicities that produce an artificial already-there of the past that is not lived but imposed – become useful strata to identify and render problematic civic values and democratic processes.

What are some of the key image-objects that architecturalise historiography, particularly the historiographies of architecture, design and art? What are the ontological conditions surrounding these historical image-objects, their construction and dissemination? What alternative topologies of memorialising the past are imaginable: narratival, conversational, oral and gestural? What images are inherited by the historian, and how does the interior (psychic) condition of the historian assimilate (or not) the otherness of the image-objects that arrive from the outside?

Taking seriously the metaphor of the cinematic, the temporalisation of the image-object and its absorption into the sphere of production, and the indeterminacy of images that carry the technics of interhuman relations, this issue of Interstices: Journal of Architecture and Related Arts [1] invokes the theatre of the historian’s individuation alongside history’s mnemotechnics that organize the images which appear whenever memory is invoked.

We invite you to contribute to the forthcoming issue – either in the refereed or non-refereed part. Interstices accepts both academic and practice oriented, fully written as well as visual, contributions for double blind refereeing and welcomes articles related to the issue theme. For the refereed part, we welcome submission of 5000 word papers and visual submissions with an accompanying text of approximately 500 words. For the non-refereed part, we welcome papers up to 2500 words and project reports and reviews of up to 1000 words. Please visit our website and check out the Notes for Contributors for details about the reviewing process, copyright issues and formatting: http://www.interstices.ac.nz/.

Please send your submission to Andrew Douglas (adouglas@aut.ac.nz) by 28 February 2012. Authors accepted for the reviewing process will receive confirmation and a schedule in early March and the journal will go to publication in November 2012.

We look forward to your contribution!

[1] Interstices: A Journal of Architecture and Related Arts received an “A” rating in the 2009 and 2010 Australian Research Council’s Journal Ranking Exercise. See also http://www.2020publication.info/ 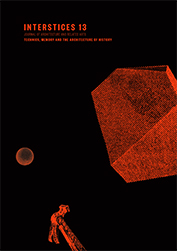