Craters: Between cleared and constructed, between absent and present

The following piece is a bricolage of both absence and presence, borne of the observation of such phenomena within a 1953 exhibition, held at the ICA, London, called Parallel of Life and Art. There were no captions. Only an accompanying catalogue detailing the titles and sources of each image. It is through both this catalogue and the photographs taken of the exhibition that it was discovered that one of the images was not always present. What seems significant is that this absent-present image was an aerial view of a crater. This paper, thus, deconstructs and re-textualises the spatial phenomena associated with the word crater, tracing the understandings and associations of these at once both forcibly evident and evasive marks, joining the dots and navigating between spatial and textual fields. This piece is an opening; an opening outward toward the peripheral, the marginal, and from the crater image to the craterous landscape of post-World War II London, in which the Parallel of Life and Art exhibition took place. It is a series of productive readings about the site of the exhibition, yet, it is also a tracing through etymological origins and mythological tales whose beginnings, like the exhibition itself, exist only as allusive references. It is a tracing that enables a glimpse into the space between: between cleared and constructed, and between absent and present. 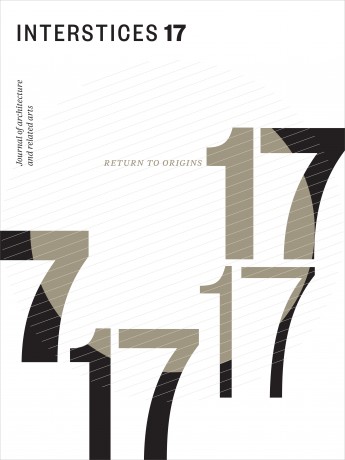 Published
2016-12-25
How to Cite
Mason, A. (2016). Craters: Between cleared and constructed, between absent and present. Interstices: Journal of Architecture and Related Arts, 54-66. https://doi.org/10.24135/ijara.v0i0.502
Download Citation
Issue
Interstices 17
Section
Peer Reviewed
Make a Submission