Symposium in Honour of Joseph Rykwert

On Adam’s House in the Pacific

If, in this part of the world, the context is defined as paradisiacal, what is the need for architecture? Is it enough that building in such circumstances be as little mediated, as natural, as possible? How does architecture become dependent on this natural context? What is this Pacific which is invoked in the guise of a scene or site to safeguard a paradise and to define a natural architecture? Idyllic, remote and untouched parts, where architecture is barely needed, seem to summon up notions of original dwelling from the very surroundings in forests, glades, clearings, mountains, beaches, lakes and deserts. They summon up the primitive in the form of sheds, cabins and even villas and tourist resorts which assemble sources for the uncorrupted hut.

Why does the private or single family house gain importance within such a primal setting? Does the proliferation of books on the house signify that this is the sole local discourse? How does this demand for native traits measure against the original dwellings, such as whare and fale? Where do they fit? How do they fit? What has been the role of the discourse of appropriation?

The primitive hut seems to provide the basis of a natural perception, uncluttered by cultural baggage where only innate ideas and external necessities prevail in the pursuit of ever purer tectonics and returns to origins. As Joseph Rykwert argued over thirty years ago in On Adam’s House in Paradise: The Idea of the Primitive Hut in Architectural History (1972), the primitive hut provides an image of perpetual reconstruction, a paradigm of building and renewal by return to origins. But perhaps this primitive hut could also be encountered as an exorbitant cultural accumulation of concerns with natural origins, derivative of a Rousseau-inspired Eurocentrism, an overly-cluttered baggage of cultural assumptions and idealisms. Since the publication of Adam’s House, discourses of architecture have engaged in a panoply of critical concerns that question the search for origins and the existence of simple natures. Would Adam’s house, for example, survive the tremors of Grammatology? Could a radical understanding of communitarian ethics be derived from the Hut’s primitive and essential nature?

In what ways are these themes still alive and relevant today? What modes of renewal, return, persistence, continuity exist in today’s architecture here? What further contribution could be made to the theme of Adam’s House?

The symposium will take place on Saturday 15 November from 10am-6pm at the School of Architecture & Planning, The University of Auckland.

While participants will deliver only 20 minute papers in the first instance, it is intended that the result will be an edited book published by Interstices.

Abstracts will be peer reviewed. Further details to be advised. 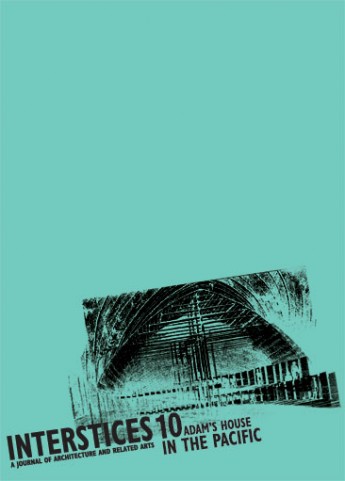